Songs To Learn And Sing - Episode 342
This episode featured a couple of tracks from Elmer Bernstein's soundtrack to one of my favourite films: Alexander Mackendrick's Sweet Smell of Success. The 1957 film concerns J.J. Hunsecker, played by Burt , the most powerful of the columnists, whose items can make or break a career and Sidney Falco, played by Tony Curtis, a press agent who supports himself largely by getting items into Hunsecker’s column.  The film was seen as a thinly-veiled attack on Walter Winchell, who for decades had been the most famous and reviled gossip columnist in .
Elmer Bernstein wrote the score that incorporates the beguiling jazz of the Chico Hamilton Quintet (who play live in several night club scenes). The Chico Hamilton Quintet were one of the last really important West Coast jazz bands and were really popular at the time of filming. Martin Milner plays Steve Dallas, the jazz guitarist and leader of the band who is dating Hunsecker’s sister. 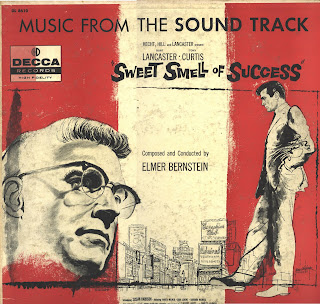 Elmer Bernstein - Sweet Smell of Success (Orchestral Themes)
(1957, Decca Records)
Two soundtracks were released one featuring Bernstein's orchestral score and another featuring the jazz tunes of The Chico Hamilton Quintet. "These are the sounds of a small section of New York. The section lies between Columbus Circle and Times Square. This is the world of Sardi's, Toots Shor and the Twenty One, Lindy's, Reuben's and the Stage Delicatessen. This is the world in which adolescent dreams of sucess in bright lights must be implemented in work, endless interviews in producers offices and the quick wit of the press agent and columnist. In this tiny empire lives are made and destroyed by the public, critics and columnists... This then is the world. The music reflects the tempo, anguish and frustration in a contemporary, popular idiom. Therefore we find one of our central characters, Sidney Falco, characterized by the kind of musical sound that could be coming from any of the many night spots such people frequent" Elmer Bernstein, 1957. 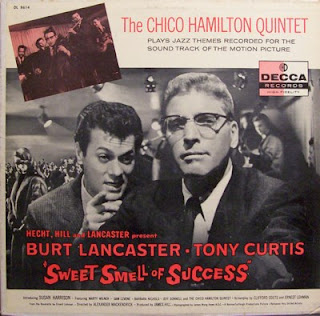 The Chico Hamilton Quintet - Sweet Smell of Success (Jazz Themes)
(1957, Decca Records)
Hamilton spoke to Bill Mackowski of Jazz Times for a 2001 article about filming the movie and working with Mackendrick: "He was a helluva director but the lines that I had to deliver were just not right. For instance, at one point I was supposed to say about Marty Milner’s girlfriend, ‘Throw a rope around her and keep her here while I go get him.’ And I told the director, ‘Man, musicians don’t talk like that! As far as I’m concerned, it’s dumb.’ And he said, ‘Well, what would you say?’ So I told him, ‘Well, I’d probably say something like, ‘Cool this chick here while I go get him.’ And he said, ‘Good, good, we’ll use that.’" 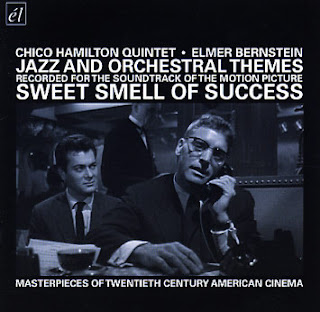 Chico Hamilton Quintet/Elmer Bernstein - Sweet Smell of Success
(Jazz and Orchestral Themes)
(2008, él Records)
Both soundtracks were eventually reissued on one Cd by él Records in 2008. Upon its release Sweet Smell of Success was received with mixed reviews from critics. Audiences who had the year before been thrilled by the high-flying acrobats of Lancaster and Curtis in Trapeze were left struggling to pick a hero from two evil manipulative characters.  When the film was screened by a audience, one viewer wrote on her preview card: “don’t touch a foot of this film.  Just burn the whole thing.”  The film flopped.
Episode 342 - 31/03/2011
Playlist

Songs To Learn And Sing

On this blog I post playlists, old interviews from the show and various bits of gig memorabilia.